This page is a work in progress. As I learn of new technologies (or even old ones) This page will be updated.
Energy runs our lives. We need energy for our homes, our businesses, for cooking. The computer, tablet, or phone you are using to look at this web page is using electricity. Most everything we do involves electricity, There is only one source of natural electricity, and that is lightning. But thus far, I know of no way that we can harness and store electricity from lightning. So therefore we need to create electricity ourselves.

Short rundown on how electricity is created.

Since the dawn of the electrical age, electricity has been made by generators  or turbines (another name for a generator). Basically the rotor spins in a magnetic field generating electricity.

The question is, how to get that rotor spinning. That's where fuel comes in. In the past it's been primarily from 4 sources.
Water, which the flow of water can turn a turbine and create electricity. Such as in a Hydroelectric Dam.
Then there is Coal, oil (diesel fuel) or Natural Gas. That fuel is burnt, boiling water, generating steam, which turns a Turbine, which turns the turbine which creates the electricity which we all use.

I won't get into the specifics of how generators work, you can go to these sites to see how they work.

As the 21st century progresses, there are more and more ways to create electricity, most of them still require generators, but there a few that don't which we will show you later.​ These methods for the most part do not require a fuel source to create steam to drive the generators to create energy. Although there are alternative renewable fuel sources as well. We will get into that in the Alternative fuels section.

​Cooking with the sun is probably the most efficient way to cook. Though it may not be the fastest way, it is free, and the source is abundant. During times of emergencies, camping, or just to save energy or have fun, using a solar cooker is a great way to go. There are many types, but the basics is a metal box with a piece of glass on the top. To get it hotter, you can add mirrors or reflectors to reflect more sunlight into the box. I will not go into detail here.
There are many links to go to for more information. Check in the LINKS section at the bottom. 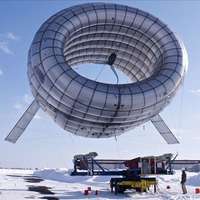 A wind turbine works the opposite of a fan. Instead of using electricity to make wind, like a fan, wind turbines use wind to make electricity. The wind turns the blades, which spin a shaft, which connects to a generator and makes electricity.

There are several different types of wind turbines. there are horizontal axis that looks like a fan, and there are vertical axis turbines that can resemble an eggbeater.  There are small turbines for use for your house, There are Large industrial turbines you might see as you are driving along the road, and then there are very very large turbines in the ocean, where the air current is more steady.

There are also flying turbines that fly like kites or blimps up in the air where the air currents are constant. These are still in the experimental stages and haven't come to main stream yet.

I am sure you have seen large dams that generate a lot of hydro power. Enough to power a city. Micro hydro is the same idea, but smaller for just a house, or community.

Tidal energy works in the same way as Wind energy. The main difference is that this works as the tide or water as the driving force instead of wind.

The wave energy devices being developed and tested today are highly diverse, and a variety of technologies have been proposed to capture the energy from waves. Some of the more promising designs are undergoing demonstration testing at commercial scales.
​
Wave technologies have been designed to be installed in the nearshore, offshore, and far offshore locations. While wave energy technologies are intended to be installed at or near the water's surface, there can be major differences in their technical concept and design. For example, they may differ in their orientation to the waves or in the manner in which they convert energy from the waves.
​http://www.boem.gov/Renewable-Energy-Program/Renewable-Energy-Guide/Ocean-Wave-Energy.aspx 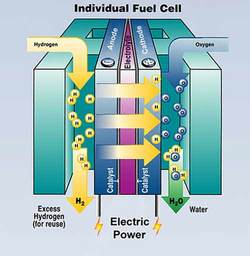 A fuel cell is a device that converts the chemical energy from a fuel into electricity through a chemical reaction of positively charged hydrogen ions with oxygen or another oxidizing agent.[1] Fuel cells are different from batteries in that they require a continuous source of fuel and oxygen or air to sustain the chemical reaction, whereas in a battery the chemicals present in the battery react with each other to generate an electromotive force (emf). Fuel cells can produce electricity continuously for as long as these inputs are supplied.
https://en.wikipedia.org/wiki/Fuel_cell

Here's an easier way to understand it. A fuel cell combines hydrogen and oxygen to produce electricity, heat, and water. Fuel cells are often compared to batteries. Both convert the energy produced by a chemical reaction into usable electric power. However, the fuel cell will produce electricity as long as fuel (hydrogen) is supplied, never losing its charge.

Fuel cells are a promising technology for use as a source of heat and electricity for buildings, and as an electrical power source for electric motors propelling vehicles. Fuel cells operate best on pure hydrogen. But fuels like natural gas, methanol, or even gasoline can be reformed to produce the hydrogen required for fuel cells. Some fuel cells even can be fueled directly with methanol, without using a reformer.
In the future, hydrogen could also join electricity as an important energy carrier. An energy carrier moves and delivers energy in a usable form to consumers.

Renewable energy sources, like the sun and wind, can't produce energy all the time. But they could, for example, produce electric energy and hydrogen, which can be stored until it's needed. Hydrogen can also be transported (like electricity) to locations where it is needed.
​

Geothermal is simple to understand. It works pretty much like the water heater in your home, however in a larger scale. Water, or a liquid substrate, is pumped through pipes down in to the earth where the warmth of the earth heats it up, it  is then pumped back to the surface where the hot water turns to steam to turn turbines to create electricity.

Alternative energy links.
Some of these links may not work anymore. If so, let me know.
Solar Energy
Solar Cooking​
Wind Energy
How wind turbines work
AWEA
US DOE WIND POWER
Micro Hydro​